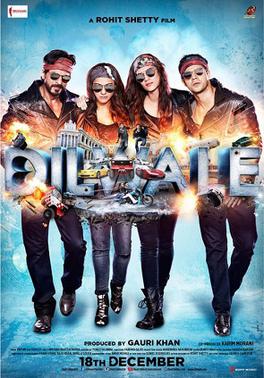 Dilwale is akin a faux-John Constable work whose restoration efforts are handed to an age-11 gen-Z kiddo whose fancies include va-va-voom Hot-wheels cars, hunky-dory send-dem-enemies-flying-outta-buildingz superheroes & ‘cool’ romanchic-magnets. The yellows-glowing petals and gleeful-green meadows from Dilwale Dulhania Le Jaayenge, the original malady that struck the Indian audiences’ hearts back in 95 and affected them with symptoms that most prominently include an affinity to idealistic romance, have found a much bigger, more life-sapping derivative in the form of Dilwale. And its Dr. Strangelove/Mogambo is none other than Golmaal trilogy/Chennai Express master-of-the-mindless Rohit Shetty.

He reunites Kajol and Shahrukh Khan, the superstar screen couple who reigned over Indian screens as Simran and Raj in DDLJ. Queen K looks as gorgeous as ever, and with cryogenically frozen features she struts through the film like it’s her runway. Her costume designers pull out all the stops to drape her like she’s the star of the most expensive ad for a 4K resolution Samsung TV. (Watch the Gerua video to catch snippets of the couple claiming unknown icebergs, crashed airplanes and practically any unfound corner of the earth like Columbuses’ Indian counterparts). Well, who wouldn’t be psyched to get paid in crores for flittering around the streets of Bulgaria in florals? Later, when a plot twist requires her to shift base to Goa, she gets in Charlie’s Angels mode for a moment to bash up Johnny Lever in a fake-Tamilian getup. And when the big baddies come into picture, she comfortably steps back like an obedient Bollywood heroine and lets King K take charge.

King K goes through the motions, bumping off enemies like a Masterchef chopping veggies, posing shirtless with his arms spread wide, and staking claim on Kajol with a momentary Bolly-gaze (‘hero spots heroine. Looks into her eyes. And she’s bought!’). He has aged, and suitably plays a peacable garage-owner in Goa who goes by the name Raj. Except his face very clearly shows he’s got a past and he needs to revisit it because if he doesn’t… no shirtless scenes, and no frontin with Kajol in his arms, right? And for this, he needs a trigger.

And the mention of ‘Kaali’ does the trick. Who’s this mystery person ‘Kaali’? Well, guess who? It needs Varun Dhawan, playing his younger bro Veer and hamming his way to glory, and his brawly antics with local drug dealers to threaten Raj’s hidden identity from tumbling out of the closet. Till then, the plot revolves around Veer perving on Ishita Malik (newbie Kriti Sanon) until she’s head over heels in love with him (Bollywood lesson-on-romance 101 – Act inappropriate until the girl finds it cute). But once Kaali’s subplot takes over, the films switches to a lengthy flashback in Bulgaria that extends until interval.

We learn Raj was actually Kaali, the son of a underworld don living in Bulgaria. He’s in a speedy car chase until it takes an untimely halt when Kajol is sighted. And then begins the predictable romance track between Kajol’s Meera and Kaali as they romp around cafes, lakes and in case of Gerua song, Windows wallpapers. But wait – there’s a bigger twist. There’s more to Meera than meets the eye; she turns out to be the daughter of the rival crime-lord. The betrayal is a high point in this otherwise tepid affair. But for how long can one see SRK and KJ in rivalry mode? So, by the next two scenes, Shetty has them patch up. And then there’s family opposition. And finally a gunshot that sends Kaali to Goa, where he resigns from his former life.

The film gets back to Dhawan’s run ins with drug baron King (played by Boman Irani) and his henchmen. But that’s all fluff. There’s nothing much that can be done to this tale, so Shetty adds Sanjay Mishra as unauthorized dealer Oscar Bhai and Varun Sharma as Dhawan’s friend Sidhu. The padding done is so glaring it embarrasses. By the time Sharma ended his Pyaar Ka Punchnama inspired rattle about the fairer sex, I scuttled out of the theatre. My greatest regret – paying Rs. 320 for this busted product.