Rupaul’s Drag Race may be among the top binge-watching television series for many LGBTQ individuals. Its highlights are plenty. The stunning runway walks that feature exotic & daring costumes. The spectacular ‘lip-sync for your life’ decider rounds. The backstage gossip, and the shade (explained in Paris is Burning by Drag veteran Dorian Corey as ‘when a queen doesn’t have to say you are terrible because you already know it yourself!’). The savage commentary, especially by comedy queens Bianca Del Rio and Darienne Lake. The over-the-top weekly challenges that no producer on any other programme on American television may air. And the standout candid moments that counterbalance the entire spectacle with a humane touch.
The show resembles a gaudy elaborately decked Christmas tree decorated

with anything and everything available at bargained prices (most of the show’s drag queens can’t pay for originals, one exception being Alyssa Edwards and her $3000 wig). Kudos to the mega-successful Rupaul, an African American drag mother still killing it her stilettos as she hits fifty, for pulling her show for eight consecutive seasons, including introducing various spin-offs along the way. And props to each of the drag contestants who’ve brought a much needed variety to identity. We find parts of ourselves – the diva persona, the bubbly face, the goofy self – in the broad spectrum of characters they so explicitly present to us.
Even with all this praise, I cannot turn a blind eye to the show’s shortcomings. These queens are often encouraged to be critical and snaky (to generate ratings, like on most reality shows). Sometimes the judges’ feedback tends to get brutal, especially as it targets the person’s appearance. For a show which at root is about ‘the acceptance of every size and shape’, the focus on pageantry often kills the cause. And finally, what’s often shrug under the carpet is the marginalized presence of African American drag queens in the race. Even in Season 6, it was sadly evident that a competent Trinity K Bonet would invariably be the last in the pecking order.
Paris is Burning shows that one of the cornerstones in drag history drags back to the ball culture in the 80s, mainly shaped by African American and Latino trans and gay communities. The documentary, made by Jennie Livingston was filmed in the late 80s and found (to many people’s surprise) a successful release in American theatres. And the various ramp walks, taking place in dinghy & cramped quarters than on expensive stages we now see on Rupaul’s show, evince a majority of African American and other minorities. This is evidently a stark contrast from the professional runways, magazines and movies back then, which gave even less opportunities for black people in media except in secondary/minor roles.
Each of the drag queens of colour interviewed here, including Pepper Labeija – mother of ‘House of Labeija’, Freddie Pendavis and Willi Ninja – mother of ‘House of Ninja’ and easily the most famous of anyone in the movie – identify not with famous black women, a few and far in between the tons of white celebs, but with Monroe and other successful white women. And the film exposes their problematic aspirations to blanche the black out of them to fit into the mainstream society. It is unfortunate these immeasurably strong individuals, who inspired by Egyptian 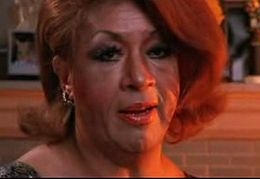 hieroglyphs and gymnastics, created the distinctive dance form of voguing, couldn’t fully embrace their African American heritage and so casually slighted it as inferior to the ‘white culture’ of sophistication. It is one of the few white drag queens Dorian Corey featured in the film who underlines this misguided ambition of many African American drag queens. She is the astute one to observe the dangers of drag life – the escapism from reality, the intrusion of pageantry. Her remark that no matter how hard one tries to hide oneself through disguise, one cannot escape the harshness of the real world – is the realest moment in the entire film.
No matter how much Rupaul show glamorizes the drag world, the hardships, pains and prejudices of the world outside drag exist. And one must’ve forget them.