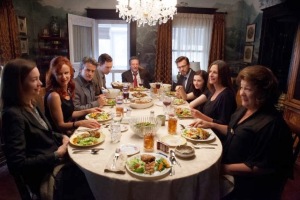 I had prepared myself for this one, having posed a question to playwright Tracy Letts during an audience Q&A round (the selected question, along with Letts’ response can be read here: https://sashankkini.wordpress.com/2013/11/28/my-question-to-playwright-tracy-letts-for-august-osage-county-live-qa-with-cast-and-crew/).

Pruning a three-hour tragicomedy into two for film also calls for adjustments to the resultant footage. In simple words, care should be taken to equalize the ‘just-noticeable difference’ due to reduction in material. Maybe it was Weinstein’s decision to shave off scenes that in his opinion added little value to the overall film. However, the cuts prick.

Let’s consider a scene in the play towards the finish in which the distraught Barbara, Violet’s eldest daughter, attempts to kiss Sheriff Gilbeau but ultimately withdraws; this happens two weeks after her ex-husband Bill leaves the house with their daughter Jean. The film slings out this sequence entirely and moves on to the ‘catfish’ catfight between her, Violet and Ivy. A turning point for Barbs, the scene also justified a previous conversation involving Gilbeau between Barbara and Jean. Maybe when Roberts and Breslin were performing the scene, they held the impression Gilbeau would appear later into the film. Roberts adds a weight to her words that is balanced by Gilbeau’s appearance. But since he’s missing, Roberts’ tone should’ve been slightly different, something that didn’t mislead us to believe he’d come.

Certain deletions impact character dynamics as well. The film hardly showcases Violet interacting with her granddaughter Jean, while the play teases Jean’s voluptuous boobs with jocular remarks from Violet (as well as Mattie Fae, which has been retained). The “Hollywoodish” ending (a shift of focus from Violet to Barbara) may have worked had the film been Julia’s journey from the beginning.

The screenplay, also penned by Letts, hangs in mid-air motionless, like it’s stuck in the plains, in the sense that its confused about what it should take in to maintain the flow, what it could leave out to avoid appearing stagey and what it can add to make it more cinematic. Paul Thomas Anderson’s Magnolia, constructed in myriads of concurrent and converging storylines, threaded a satisfying storyline for each major character while tying it all to the major themes of the film. The only characters lucky enough to get a special treatment in August Osage County are Violet, Barbara, Mattie Fae and Charles, Ivy and Karen. The others, especially Barbara’s husband Bill, Karen’s fiancé Steve, Jean, Little Charles and Johnna, the native-American maid are slovenly handled. The issue of Native Americans driven out of their country by settlers could’ve been explored more deeply on film. But expect for scattered references and a simplistic symbolism on the wall, little effort has been taken to delve into that angle. 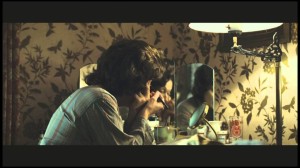 The biggest irritant is the camera sitting through wordy, rehearsed monologues adapted too faithfully to sparkle on film. When Meryl browbeats Ivy for not wearing make-up, the camera cuts back and forth between the two, selecting the same position every time. The rehearsed nature, devoid of the improvised spontaneity visible in Altman films, adds to the laggardness. The actors are a touch too sombre to possess a vibrant volatility demanded during the dinner sequence. The screenplay wants the best of both stage and cinema and succeeds in neither. 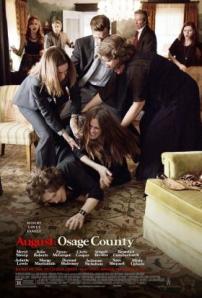 August: Osage County, ripe in contemporary kitchen-sink melodrama in the style and flavor of an out-and-out explosive Tennessee Williams work (all vintage movie lovers, I urge all you to catch Elia Kazan’s film A Streetcar Named Desire) deserved a David O Russell down-and-dirty hard-edged treatment bundled with Robert Altman’s spontaneity and Paul Thomas Anderson’s virtuosic vision. Instead fertilized by a less-known John Wells, primarily known for his role as an executive producer in television series ER, The West Wing and Shameless (he’s just got directorial credits for one film called The Company Men, scoring a decent 67% on Rotten Tomatoes), the cinematic adaptation of Tracy Letts’ Pulitzer-Prize Winning play (hence the film could boast of winning an ‘award’ already before it’d won one) lacks a language and voice to hold its own in a year resounding with masterful efforts like Scorsese’s The Wolf of Wall Street, Russell’s The American Hustle, Greengrass’ Captain Phillips, Farhadi’s The Past, Cuaron’s Gravity, Coen Brothers’ Inside Llewyn Davis, Jonze’s Her etc. Little films need to pogo big to register a spot in the massively crowded movie market, and I can think of at least three titles on the fly whose strengths haven’t been tasered by limited finance – Harmony Korine’s Spring Breakers, Sean Durkin’s Martha May Marcy Marlene, and Paddy Considine’s Tyrannosaur. Osage County, unlike these films, puts on a less-than stellar show under Wells solemn, courtierly, risk-free treatment. With all the luminous and sometimes breathtaking display of acting from an assorted bunch of talents, how did this movie end up? Well, plain. Or, in Violet’s own words: Ehhhhh!

Let’s analyze why this picture came to be. George Clooney and Harvey Weinstein are two of its producers; Clooney’s done The Descendants, which also dealt with aftermath of someone’s death (not technically death but coma and eventual demise) while Weinstein hoped for a winning prestige production. The latter’s deified trump card Meryl snagged another meaty role (rare for women, as she repeatedly asserts). Julia Roberts flushed in excitement on announcing she’s working with Streep. The rest, from McGregor (Amazing to watch Streep at work) to Breslin (I was just so like excited, and like, scared, and like…), were keen to work with these two premier ladies. Tracy Letts’ play was chosen for its popular and honored reputation. John Wells was chosen so he could be bossed around by Streep’s demand for acting liberties and Weinstein’s demand for cuts. Shooting took place over a short time span of three-four weeks, and subsequent test screenings led to much editing and revisions. And as the awards reveal, almost every single nomination is for the acting category, either for Streep or Roberts or the ensemble. In a few months, unless Newt Gingrich turns out right (he tweeted ‘August: Osage County is a brilliant film… you will never forget it), most audiences will talk about the good stuff like Hustle and Wall Street and ‘that Meryl Streep’ performance.

You hop into a wonderful film from scene one and are ferried around on a perfect, bump-free ride. An hour and fifteen minutes are taken for August: Osage County to finally let you in. The big ball of past chokes the film till that point, and you’re confounded as to what to anticipate until a major plot development turns up (at least for me) after a big reveal. That’s sorted in the remaining run-time, that is to say, less than half the runtime. The preceding events lack spontaneity, those involving the death of Beverley Weston, the defeated patriarch of the long-dispersed Weston family, and the dysfunctional family’s dreaded reunion that culminates in an fiery, uproarious dinner table ‘truth telling’ sequence i.e. Pandora’s box in the sentient form of Violet Weston, the matriarch lashing out at any unwilling target, especially her 40-plus daughters Barbara, Ivy and  Karen for their “ungratefulness and neglect ”. You detect invisible stage directions scribbled at the top corners of the screen which are manipulating the story instead of an organic flow. And I’d like to preempt any accusations of ignorance from readers who believe I’ve not read the play by saying that I read it the day I learnt it was to be adapted to film.